During the occupation of Korea by Japan in WW2, the practice of traditional martial arts was prohibited.  Once the ocupation ended; schools known as "Kwans" opened all over Seoul.  Most schools were opened by martial artists that had studied in Okinawa and China, during the ocupation.  Many moves share names with strikes found in Shotokan Karate, though elements of Korean styles like Taekkyeon and Gwonbeop were also incorporated.

The umbrella term traditional Tae Kwon Do typically refers to the martial arts practiced by the kwans during the 1940s and 1950s, though in reality the term "Tae Kwon Do" had not yet been coined at that time, and indeed each kwan was practicing its own unique style of martial art. During this timeframe taekwondo was also adopted for use by the South Korean military, which only served to increase its popularity among civilian martial arts schools.

​     The name Taekwondo is generally credited to Choi Hong Hi. The World Taekwondo Federation claims that taekwondo development was a collaborative effort by a council consisting of members from the nine original kwans, while the International Taekwon-Do Federation credits Choi Hong Hi solely.

Extend your kick high, and then bring the heel downward using both your strength and gravity to strike your opponent.

While pivoting on one heel & looking at your target, you rotate your hips and extend your foot towards towards your target. 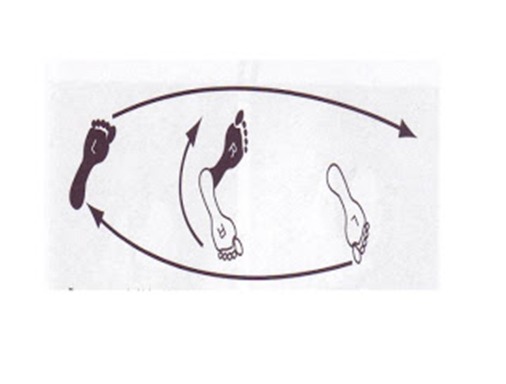 This kick is executed by turning the body in order build momentum and increase you pounds per sq. inch