Pedang
Pedang is a general term for swords but occasionally refers to a scythe as well. According to the Sanghyang siksakanda ng karesian canto XVII dated 1518, the sword and kris were the main weapons of the kesatria caste. Southeast Asian swords can differ considerably from one community to another but they are generally made for one-handed use. Varieties include the pedang jenawi or longsword, the gedubang or Acehnese sabre, and the long-handled dap. The Indian-style sword was used in the region as early as the 4th century, as can be seen in bas-reliefs of Javanese temples. Some are straight while others have a "bent" curve. The Hindu goddesses Durga and Manjusri are typically depicted carrying swords in Javanese art. Swords on the Malay Peninsula are usually one-edged with a slight curve, resembling the Burmese dha and the Thai sword used in krabi krabong.

Edged weapons are given priority in Silat, but the stick and sarong are also popular for self-defense. Because Southeast Asian society was traditionally based around agriculture, many of these weapons were originally farming tools. 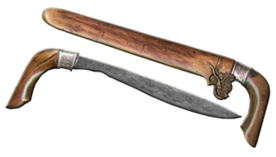 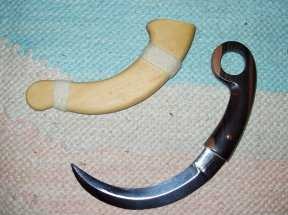 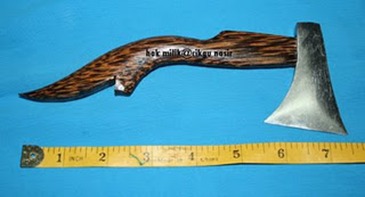 The kris or keris is a type of dagger, often with a pistol-gripped handle. Traditionally worn as a status symbol and carried by warriors for when they lost their main weapon in battle, today it is the main weapon of most silat styles. The kris is characterised by its distinctive wavy blade, but originally most of them were straight. The blade is given its characteristic shape by folding different types of metal together and then washing it in acid. Kris were said to be infused with venom during their forging but the method of doing this was a closely guarded secret among blacksmiths. The kris is usually wielded on its own but it can also be paired.

A staff, pole or rod. Silat exponents regard it as the most versatile of all weapons. They are typically made of rattan, but some are made from bamboo or steel. The word galah refers to the pole used for knocking fruit down from trees or when punting a boat. Staves can also be referred to as tiang or kayu. Staves are usually 5-6 feet in length and 1.5-2 inches in diameter. A longstaff is called galah panjang.